The New Deal for Consumers, a major legislative package aimed at updating EU consumer law for the modern economy was the theme of AmCham EU’s July plenary meeting. A panel discussion on the proposal to modernise and better enforce consumer rules covered a wide range of issues including the right of withdrawal, transparency requirements for online marketplaces and penalties for infringement. 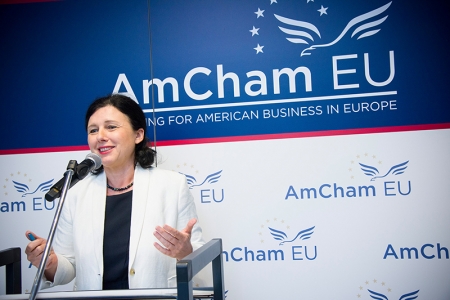 This discussion was followed by keynote remarks from Věra Jourová, European Commissioner for Justice, Consumers and Gender Equality, who spoke about her goal of reaching balanced final texts fit for the purpose of protecting consumers.

The New Deal for Consumers is a key priority for AmCham EU, given our member companies’ commitment to serving consumers across the Single Market. Like the Commissioner, we are keen to ensure that both proposals in the package do not undermine the existing legal framework, which was found to be strong and balanced in the Commission’s recent ‘fitness check’. We will be active throughout the coming months to share our practical experiences with policy-makers.

For more information on AmCham EU’s position on the New Deal for Consumers, read our paper on enforcement and modernisation here and on representative actions here, or contact Jarrod Birch (JBI@amchameu.eu).