On Tuesday, 15 October 2019, AmCham EU hosted its annual trade Plenary meeting. Discussions focused on key priorities for the EU’s trade policy for the next five years. The keynote address was delivered by Sandra Gallina, Deputy Director-General, DG Trade, European Commission. She gave her perspective on the importance of transatlantic cooperation and the trade agenda of the EU. 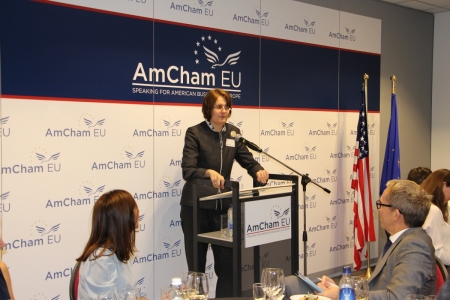 A panel discussion featured views from the European Parliament on the future of trade policy in this new legislative cycle. The panel was composed of Joost Hermans, Political Adviser for the Committee of International Trade (INTA), Renew Europe; Barbara Melis, Political Adviser for the INTA Committee, S&D and Joanna Warchol, Political Advisor for the INTA Committee, EPP. The discussion was moderated by Jana Titievskaia, Trade Analyst, European Parliament Research Service. They discussed the importance of both the transatlantic partnership and a functioning rules-based trading system, as well as their groups’ position on the ratification of the EU-Mercosur and EU-Viet Nam free trade agreements (FTAs).