Taggart Davis, Executive Director for Government Relations at JP Morgan and Vice-Chair of AmCham EU’s Brexit Task Force, featured on a high-level panel at AmCham Bulgaria and the British Bulgarian Business Association’s event entitled, ‘Brexit and The Future of Global Trade,’ on 25 October 2018 in Sofia, Bulgaria. 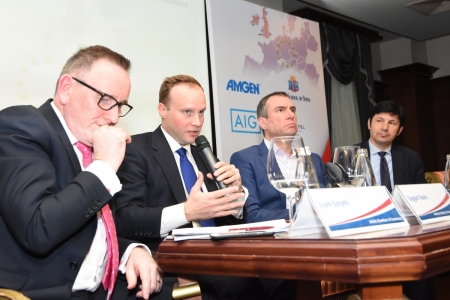 Speaking to an audience of government leaders and business executives, Taggart emphasised the depth of US investment in both the EU and the UK and the importance of negotiating an ambitious new EU-UK relationship post-Brexit. He also reiterated the importance of reaching a Withdrawal Agreement as soon as possible to avoid a ‘cliff-edge’ scenario that would be particularly damaging for businesses. An agreed and ratified exit deal would also provide for a transition period to give companies time to adapt to new requirements.

AmCham EU was delighted to partner with AmCham Bulgaria for this important event and would like to thank them for their hospitality and flawless execution. Cooperation with the American Chambers throughout Europe is a key priority for AmCham EU and critical to maintaining positive EU-UK-US ties in the future.

Read more about our work on Brexit