Dr. Günter Burghardt, former EU Ambassador to the United States reminds us that 20 years ago on 3 December 1995 the New Transatlantic Agenda (NTA) was adopted which set in motion a new era in transatlantic relations. Click here to read his article. 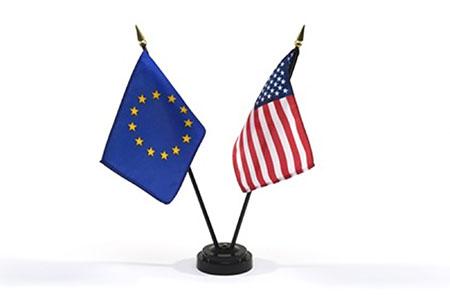 On 3 December 1995 the EU-US Biannual Summit took place in Madrid with then US President Clinton, Prime Minister Gonzales of Spain and President Santer of the European Commission to adopt the New Transatlantic Agenda (NTA) together with a Joint EU-US Action Plan.

The Transatlantic Declaration (TAD) was adopted 25 years ago on 23 November 1990 at the Paris CSCE Summit with then US President Bush, Prime Minister Andreotti of Italy and Commission President Delors which established the institutional framework for transatlantic consultations.

For the first time, these two documents codified the mechanics and the substance of the transatlantic relationship and demonstrated Europe’s progress toward unity and America’s strong commitment to a “Europe whole and free” following the fall of the Berlin wall on 9 November 1989. It was the first “réalisation concrète” in Schuman/Monnet language since President Kennedy’s visionary speech of 4 July 1962 at Philadelphia’s Independence Hall when he proposed a “transatlantic partnership of equals” and a “Declaration of Interdependence” between the New World and the New Europe.

In a world of increasing global turmoil the EU/US relationship has matured into an axis of stability bringing together the world’s two most powerful economies at a time when new powers are on the rise. The annual Transatlantic Economy Survey which is sponsored by AmCham EU shows that the US and the EU still represent half of global GDP, the lion’s share of world trade and investment and about 80% of world capital markets. The 19 countries of the Euro zone share the second most important world currency in terms of global foreign reserves, international bond issues and money market demand.

The NTA opened an era of successive initiatives for joint transatlantic action over two decades, thus providing the launch pad for today’s TTIP negotiations. These include:

On a personal note: While I was privileged within the Delors and Santer Commissions to assist with the birth of NTA, I fondly remember the dedicated interaction with the then US Ambassador to the EU Stu Eizenstat, and today’s Ambassador Tony Gardner, who at the time served as the Europe point person in President Clinton’s White House. I would also like to pay tribute to the indispensable commitment of the so-called “Transatlantic Dialogues” which had been launched simultaneously with NTA in 1995, in particular the Transatlantic Business Dialogue (TABD), bringing together the transatlantic business communities and the Transatlantic Legislator’s Dialogue (TLD), which brings together MEPs and members of Congress. And I was happy to provide continued support for both during my term in Washington as the EU’s Ambassador from 2000 to 2004.