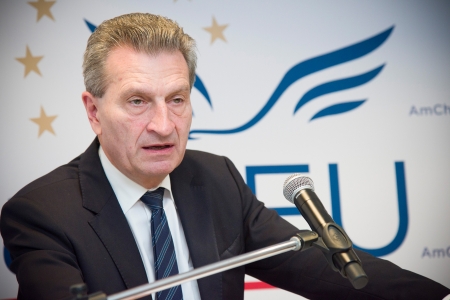 Commissioner Oettinger highlighted the importance of the transatlantic relationship for the digital economy. The cooperation needs to be strengthened, while Europe needs to speed up the creation of a Digital Single Market. This includes first off a speedy adoption of the European Electronic Communication Code to provide all businesses and households with robust and high-speed internet connection. The DSM shall create a level-playing field for all actors, including by tackling issues such as ownership of data.  Guaranteeing trust and security, including through the implementation of the Cybersecurity Partnership, and the upcoming review of the Privacy Shield will also be crucial.

The subsequent panel discussions focused on two key DSM initiatives for the data-driven economy. The first panel discussed the recent Commission’s proposal for reviewing the telecom markets rules. Participants stressed their support for this proposal, while calling for smart regulation boosting investment and enabling ever faster innovation cycles. In particular, speakers stressed that a sensible approach needs to be found for new communications services.

The second panel explored data issues in relation to the Commission’s January data package. Free data flows within the EU are key for the emergence of data-driven products, which rely on cross-border technologies. They are also a pre-condition for global data flows.  The question for a need for an EU regulatory framework for solving emerging issues such as access, IOT liability, machine to machine contracting remains open. Clear concerns were expressed around adverse impacts on Europe’s leadership in Industry 4.0.

The event concluded with a high-level panel discussion between Deputy Chief of the U.S. Mission to the EU Adam Shub, and Maltese Deputy Permanent Representative Neil Kerr on the political outlook for digital policy and transatlantic cooperation, including topics such as Brexit, the new U.S. administration, the Maltese Presidency and the Privacy Shield.

You can see photos and read Commissioner Oettinger's speech from the event here.

Panel I: Building the Infrastructure for the EU Gigabit Society

Representation of France to the EU

Jaana Sahk, Counsellor for Information Society, Permanent Representation of Estonia to the EU

Panel III: A view from both sides of the Atlantic

Neil Kerr, Deputy Permanent Representative to the EU of Malta