On Tuesday, 3 December AmCham EU and AmCham Croatia hosted a reception to welcome the incoming Croatian Presidency of the Council of the European Union. Ambassador Irena Andrassy, Permanent Representative of Croatia to the EU, and Vice-President of the European Commission, Dubravka Suica both gave opening remarks. 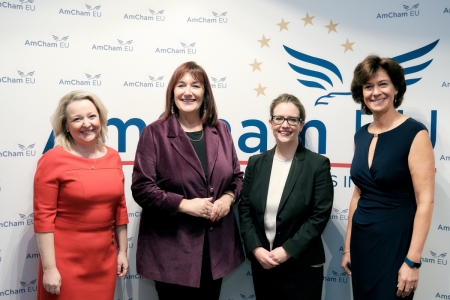 In the presence of an audience comprising a delegation of 25 AmCham Croatia members; numerous AmCham EU members; and various officials, the reception provided the opportunity for CEO Susan Danger, AmCham EU to present the trade association’s recommendations for the Croatian presidency, available here.

The reception kicked off with speeches of thanks from Ms Danger and her counterpart, Andrea Doko Jelusic, Executive Director of AmCham Croatia, both whom took the opportunity to pay tribute to Croatia’s rapid rise to the role of rotating presidency, as the EU’s youngest Member State.

Ambassador Andrassy then took the floor to outlines the presidency’s priorities. She expressed her pleasure that the priorities of the Croatian presidency align with the priorities in AmCham EU’s Agenda for Action. She restated the Croatian presidency’s desire to place the people at the heart of their work, with quality of life and security for all the key goals. She outlined the Multiannual Financial Framework, Brexit and the global political context as three key challenges the Presidency will face during its six-month tenure.

Following the Ambassador, the newly appointed Vice-President for Democracy and Demography, Ms Dubravka Suica, took the floor in her first public appearance in her new role. She expressed the honour she felt to have been entrusted with her new mandate. She outlined her full faith in the Croatian Presidency to overcome the challenges it faces and be successful over the next six months. She also insisted on the importance that the EU institutions work together to measure up to citizens’ expectations, by translating its values and principles into prosperity for all. She also expressed her determination to reach out to the broadest spectrum of stakeholders possible in the scope of her mandate, including business, for whom she sees a big role. She concluded that the future of the European Union is also about Europe’s place in the world. A networking reception followed the remarks.