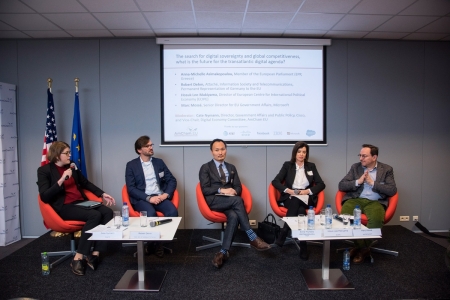 A packed programme was kicked off by a keynote speech from Jeremy Godfrey, BEREC Chair and Commissioner for ComReg. In his remarks, Mr Godfrey addressed three themes: connectivity, platforms and transatlantic cooperation. He made the case for light-touch, principles-based regulation in the tech sector, but also warned that companies must act in the spirit of the law and adhere to the guiding principles and values that underpin any light-touch regulation.

A first panel discussion on the concept of digital sovereignty then ensued, featuring Anna-Michelle Asimakopoulou, MEP, Robert Dehm, attaché of the German Permanent Representation to the EU, Hosuk Lee-Makiyama, Director for ECIPE, and Marc Mossé, from Microsoft. The panellists agreed that the concept of digital sovereignty is a broad one, which spans from individual self-determination, to control of critical infrastructure. What was clear is that we need a more refined definition in order to improve general understanding of the concept. Overall, the speakers called for balanced, strategic and ideological discussions on sovereignty. A human-centric approach to digital is the only way to get citizens on board with emerging technologies. With regard to the transatlantic relationship, the speakers asserted that more must be done to demonstrate our mutual trust on either side of the Atlantic. The speakers also rationalised that fears surrounding Europe’s digital sovereignty based on the US’s competitive advantage in offering digital services. A clearer distinction must be made between the urgency for sovereignty of critical infrastructure, and that of non-critical digital services, such as social networks.

The panel discussion was followed by a fireside chat on transatlantic digital cooperation featuring Dragos Tudorache, MEP and Karim Lesina, from AT&T. Mr Tudorache noted that the European elections earlier in the year had evidenced the heightened sentiment of patriotism across Europe, and that this theme was reflected in the new Commission’s priorities. This stood to add complexity to transatlantic cooperation. Mr Lesina pointed out that the EU and the US are becoming ever more integrated, and that they will be the global standard-bearers in digital. Companies do not view the world in terms of national boundaries, but rather in terms of global potential of an industry. We must therefore promote global standards that foster innovation.

A second panel discussion on the topic of sustainability involved Stephanie Finck, from Salesforce, Agnes Heftberger, from IBM and Ilias Iakovidis from the European Commission’s DG CONNECT. Ms Heftberger kicked things off by stating that technology has both virtues and risks, and pointed to a number of initiatives undertaken by IBM to promote digital skills and transparency. Ms Finck followed by highlighting the importance of leadership in attaining sustainability goals. Mr Iakovidis pointed out that the ICT sector is a major contributor to emissions, with heavily energy intensive processes. He underscored the importance of green-jacketing the industry and taking into account the sector’s footprint.

Helen Dixon, Irish Commissioner for Data Protection, and Rohit Chopra of the US Federal Trade Commission (FTC) took part in the second fireside chat of the day, which dealt with the topic of privacy. The discussion was largely oriented around the Privacy Shield framework, the EU’s GDPR, which Ms Dixon described as state-of-the-art, and enforcement of privacy law. Mr Chopra spoke of the differences in approach to the subject of privacy, which the US has dealt with on a sector-by-sector basis. He also drew on past cases of the FTC that had resulted in large fines to multinational companies to highlight the ongoing reflection on remedies in the US. Ms Dixon, for her part, pointed out that the GDPR is prescriptive in remedies – focusing on correcting the initial violation first and foremost, with financial penalties serving as an instrument of deterrence. Both speakers agreed that remedies should discriminate between sincere efforts to comply with privacy laws, and flagrant breaches.

To round off the conference, Michael Lally from the US Mission to the EU gave some closing remarks. He highlighted the mutual value of the transatlantic partnership to each other’s economies. He also echoed the importance of the mutual values that bind the US and the EU – including freedom, democracy and rule of law – to the digital sector and beyond.