AmCham EU continues to encourage efforts to reduce trade tensions across the Atlantic and supports any effort to normalise and deepen the EU-US trade relationship. 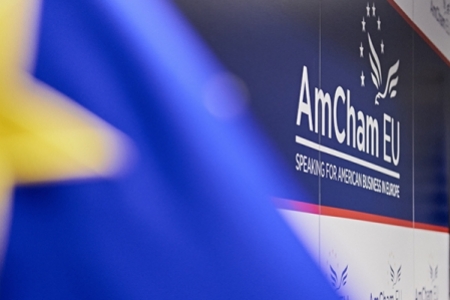 One year ago today, European Commission President Jean-Claude Juncker met with US President Donald J. Trump to de-escalate trade tensions between the EU and US. At the end of meeting, the two presidents agreed to advance on a positive transatlantic trade agenda at the highest political level via the US-EU Executive Working Group.

The EU and the US should continue to build upon the successful meeting of 25 July 2018. The recent full implementation of the EU-US Mutual Recognition Agreement for inspections of manufacturing sites for human medicines is an excellent example of how the EU and US can incrementally, and in stages, normalise and deepen their trade relationship to the benefit of consumers and companies on both sides of the Atlantic.

AmCham EU strongly encourages the EU and the US to keep working towards ‘zero tariffs, zero non-tariff barriers, and zero subsidies on non-auto industrial goods,’ as agreed in the Joint US-EU Statement. While the remaining tariffs on industrial goods are low, their elimination would greatly benefit businesses and consumers on both sides of the Atlantic. The European Commission estimates that their elimination would see a 10% increase of EU exports of goods to the US and 13% increase of US exports to the EU.

The transatlantic economy is the largest, most prosperous and most innovative in the world and continues to grow. Business confidence in the transatlantic economy remains strong. In 2018, aggregate US investment in Europe totalled more than €2 trillion in 2018, directly supporting more than 4.8 million jobs in Europe, and generates billions of euros annually in income, trade and research and development. Trade flows between the two are strong with European investment in the US in 2018 nearly doubling to USD 221 billion, from USD 116 billion in 2017.

Keeping with the spirit of compromise and cooperation of the meeting, leaderships on both sides of the Atlantic must continue to make efforts to advance on trade talks. We call on the US President and European Commission President-elect to continue an open and constructive dialogue and pursue an ambitious trade agenda with the involvement and support of the European Parliament and European Member States.