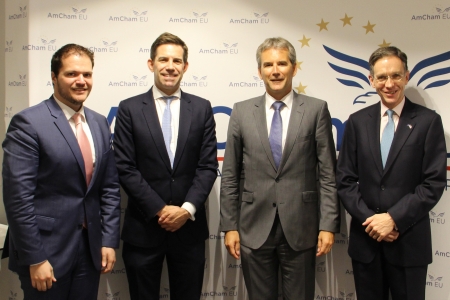 The Minister outlined some of the challenges Europe will be faced with in the coming years, including Brexit, the 2019 European elections and the discussions on the next Multiannual Financial Framework (MFF). The Minister also shared the upcoming Austrian Presidency’s priorities in the field of financial services and taxation, touching on topics such as the Banking Union, Capital Markets Union and Digital Tax.

AmCham EU members stressed the importance of completing the Capital Markets Union project, given the largest financial centre will leave the Union after Brexit. Members shared specific points on the Central Counterparty (CCP) Oversight Proposal and the European Supervisory Authorities (ESAs) Review, calling for the need to use the drive towards supervisory convergence as a tool for openness of the EU market, and avoid it becoming a tool for fragmentation. On Digital Tax, members reiterated that turnover taxes are damaging to economic growth because they do not take profitability into account, and asserted that unilateral action in this space may harm the opportunity for a global solution.

Read our position on third-country aspects of financial regulation

Read our position on digital tax